It’s Time to Give the Gospel of Thomas Its Due 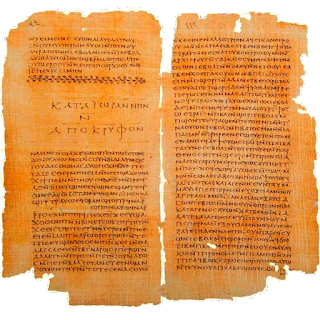 The Gospel of Thomas is part of the collection of fifty-two texts (thirteen papyrus books – “codices”) discovered in December of 1945 by an Egyptian peasant digging for fertilizer near the modern city of Nag Hammadi. The Gospel of Thomas is a compilation of wisdom sayings attributed to Jesus, some of which parallel sayings in the Synoptic Gospels. It represents the kind of Christianity that flourished in Syria by at least the last part of the first century. It may have even been written as early as the Synoptic Gospels.*

In this Gospel Jesus performs no miracles or healings, there is no link to or claim that Jesus fulfils prophesy, and there is no passion or resurrection narrative. Jesus does not die for sins in the Gospel of Thomas. Salvation is found in the struggle to understand and appropriate the wisdom Jesus taught and embodied.

I find particularly significant that in Thomas there is no announcement of an apocalyptic kingdom that will disrupt the present world order. In Thomas the kingdom of God is here and now.

Some historical Jesus scholars paint Jesus primarily as an eschatological prophet who believed the kingdom of God would break into the world through divine intervention in apocalyptic fashion bringing an end to the present age. Other Jesus historians believe that Jesus was primarily a Jewish reformer, sage, and mystic. They argue that the apocalyptic passages in the Gospels reflect the faith of Jesus’ early followers who believed that in light of God raising Jesus from the dead the end of the present age was at hand (see 1 Thess. 4:13-18; 1 Cor. 7:25-31). In their preaching and teaching they recast their apocalyptic faith back into the story of Jesus. Still others see all these portraits (reformer, sage, mystic, and apocalyptic prophet) as part of the complex person that constitutes the historical Jesus.

The closest thing we get to an apocalyptic saying in the Gospel of Thomas is Logion 113, which actually functions to shift the focus off the future to the present,

His followers said to him, “When will the kingdom come?” “It will not come by watching for it. It will not be said, ‘Look, here it is,’ or ‘Look, there it is.’ Rather, the father’s kingdom is spread out upon the earth, and people do not see it.” (Trans. from Marvin Meyer, The Gospel of Thomas, 1992)

It is not here or there, it is everywhere. It’s not going to come in the future, it’s already here. It’s spread out over the entire earth. The problem is that most people are not enlightened. They do not see it.

So the spiritual question this evokes is not, “When will the kingdom come?” or “How will it come?” It’s here everywhere right now. So the question is, “Why can’t I see it?” or even better, “What will it take for my eyes to be opened?”

Jesus said, “If your leaders say to you, ‘Look, the kingdom is in heaven,’ then the birds of heaven will precede you. If they say to you, ‘It is in the sea,’ then the fish will precede you. Rather, the kingdom is inside you and it is outside you. When you know yourselves, then you will be known, and you will understand that you are children of the living father. But if you do not know yourselves, then you will dwell in poverty, and you are poverty.” (Meyer, 1992)

Jesus is poking fun, but also speaking truth. The kingdom is in the sky and in the sea for the kingdom is both “inside” us and “outside” us. But we will never recognize God’s reign/presence in the air or the sea, unless we first recognize it inside us.

When we know ourselves then we are known, because we recognize the divine presence and image within and are enlightened to our true identity as children of God. To know our true selves is to know the One who knows us thoroughly.

When we come to know the God who lives inside us, then we are able to see and sense the divine presence and reality everywhere – in the sky and sea, among fish and fowl, in rain forests and on busy city streets.

When we come to experience the Really Real in the depths of the human soul, we can find God in suffering as well as pleasure, in sadness and grief as well as joy and celebration, in life and death. When we discover the Beyond Within, we can find God all over the place – in a rock, in a flower, in a dog or cat, and especially and most importantly in our neighbor who is not less than the Christ (Matt. 25:40).

I think it’s time to put the Gospel of Thomas right alongside the canonical Gospels. It contains valuable insights and practical wisdom for modern seekers. Its time has come.
---------------------------

* The discovery of the full text in Coptic of the Gospel of Thomas confirmed that a previous discovery of three Greek papyri found in a rubbish heap at Oxyrhynchus (modern Bhanasa, Egypt) in 1897 and 1904 were sayings from the Gospel of Thomas. These papyri represent Greek editions and reveal that several editions were in circulation. Since the earliest of these fragments dates around 200 C.E. this means that the Gospel of Thomas may have been written in the late first century or early second century. Also, taking into account the likelihood of a sayings source (“Q”) utilized by both Matthew and Luke in the composition of their gospels, it’s quite possible the Gospel of Thomas was written about that time. Many scholars who engage in comparative analysis of the sayings of Jesus argue that in a number of cases where the sayings in Thomas parallel sayings in the Synoptics the form of the sayings in Thomas may be the closest to the original.

This post was originally published at the Unfundamentalist Christians blog