At the recent Southern Baptist Convention which met in Orlando, a theme reiterated throughout the meeting was the “lostness” of the world. Consider the following quotes, taken from an article in the Western Recorder by Editor Todd Deaton titled: SBC takes ‘fresh look’ at nation’s lostness:

Danny Akin, president of Southeastern Seminary, declared: “We need to be looking forward with an aggressive agenda to penetrate lostness around the world and in North America.”

Ken Whitten, a Great Commission task force member, said: “Every pastor has to walk away from this convention asking, ‘What can I do . . . to make a difference by penetrating lostness?’”

Roger Spradlin, the newly elected Executive Committee chairperson, proclaimed: “I think God has put in the forefront in all our minds the tremendous lostness not only of the world . . . but also of North America. We are a nation of lostness.”

Until the theology, God-image, and basic worldview that undergird all this talk of lostness changes, I can’t see how Southern Baptists will offer any hope or wield any positive influence in our world.

As membership within the majority of churches within the SBC declines (both membership and baptisms are on a plummet within all branches of American Christianity) their solution is to engender louder rhetoric (shout louder) and more aggressive strategies (work harder) to proselytize those who don’t share their faith (“the lost”).

At one time I believed this way—that I was one of God’s elect, God’s chosen, and everyone else who didn’t share my faith in Jesus was “lost,” “unsaved,” or “under the wrath of God.” And though it pains me now to admit this, I even used words and phrases like “doomed” and “condemned” and “children of the Devil” to describe all those who did not fit my definition of a Christian.

Jesus’ parable of the Father and his two sons (Luke 15:11-32) may serve as a corrective here. Both sons, the wayward prodigal and the resentful elder brother, are in some sense “lost.” But in their “lostness’ they never cease being the beloved sons of the Father. There is no “us” who are saved and “them” who are lost.

The beautiful words the father speaks to the angry, bitter elder son are reflective of the all inclusive gospel Jesus embodied and represents: “Son, you are always with me, and all that is mine is yours. But we had to celebrate and rejoice, because this brother of yours was dead and has come to life; he was lost and has been found” (Luke 15:31-32).

I have a notion that wherever this inclusive gospel is rejected and a dualistic version of Christianity prevails, Christianity will increasingly become irrelevant, and may become more of a hindrance than a help in healing and bettering our world. Dualistic religion tends to polarize and divide, establishing the “in” group (the chosen, the ones who alone possess the truth, etc.) as superior.

This trend toward irrelevance and decreasing influence will become more evident in major urban centers, than in small, conservative towns, but eventually, even the most Christian-entrenched areas will feel the impact. This diminished interest in Christianity is now widespread in Europe, and America is not far behind.

According to recent surveys and studies, only about 10 to 20 percent of America’s younger generation is finding a connection to Christian faith. Most church growth comes at the expense of membership loss from other churches. Mega churches are in some sense both the result of and cause of this loss in smaller churches. All signs point toward decreased interest in Christianity, even among those who claim to be Christians. From the perspective of dualistic Christianity, it is more difficult these days to get “lost” people “saved,” and more of the “saved” are rejecting the faith once embraced.

I am convinced that traditional Christianity has to change (in both its conservative and liberal forms) in order to be a positive, redemptive influence in the world. Our basic understanding of God and God’s relationship to the world must become more inclusive, holistic, compassionate, ecological, and reconciliatory or Christianity will increasingly be regarded with both indifference and disdan.

The sad and ironic thing about all of this is that the good news of Jesus—the inclusive message he proclaimed and the compassionate life he lived—is often lost to the very ones who herald him as their Savior.
Posted by Chuck Queen at 3:43 PM 1 comment:

Some Thoughts on Religious Freedom

Dr. Fred Craddock tells about the time he was teaching Homiletics and New Testament at a small school in Oklahoma. They were hanging on by their financial fingernails. The president of the school said to Fred, “I’m in touch with a man who is concerned about improving the quality of preaching in Oklahoma. He has a lot of money and I believe he’s going to give a sizable gift to our preaching program. Will you go with me to talk to him?”

Fred was delighted to go, so Fred and the president went to visit the man at his office. He was ready for them; he had the gift ready. He said, “Before we finish this I think we ought to pray.” Neither Fred nor the president prayed. The man prayed. He had the money and he had the prayer. Amen.

He took his pen and was about to sign the check. His lawyer had everything prepared. This was a large donation. But before he signed he looked up and said, “Now, this all goes for the preaching program?” They said, “Yes sir, that’s what it goes for.” He started to write, but paused again and said, “Now, you do understand, none of this goes for women or for blacks.”

The president stood up. Fred stood up. The president said, “I’m sorry, we cannot accept your money under those conditions.” They started to leave. Then the man said, “Well, there are plenty of schools that will.”

And he was right. That man had given to schools and churches over sixty million dollars, but not a penny to women or African-Americans.

In the same way that this wealthy Christian wanted to restrict the preaching ministry to white males, there are many Christians today who would like to restrict religious freedom to Christians.

There are those who get all worked up over the prohibition of public prayer in educational institutions (there is no prohibition on personal prayer; those who pray, however, cannot require others to pray with them). Yet many of the same Christian people who are pushing for prayer over the loud speakers in public schools would get worked up to a frenzy if a Muslim or Hindu or Buddhist led in public prayer.

They want public prayer in school, but only a particular kind of prayer: Christian prayer. But that’s not religious freedom. Being an American is not to be equated with being a Christian and vice versa.

This is why patriotic services make me nervous. Waving the American flag and singing “God Bless America” in the house of worship comes close to idolatry. The Christian view is that “God so loved the world” that he sent Jesus to show us the way into truth and life.

I am glad to be an American and in many ways I’m very patriotic, but authentic Christianity calls for God to bless the world, not just America.

When Christians gather as a community of faith for worship, they are there not to pay allegiance to their country (however appropriate that may be in other contexts), but to offer allegiance to the Christ whose kingdom transcends all national, political, and territorial boundaries.

Christians in worship kneel, not before the American flag, but before the cross, the Christian symbol for true spiritual freedom, representing the wisdom and redemptive power of God.
Posted by Chuck Queen at 2:40 PM 2 comments:

In his autobiography, Brother to a Dragonfly, Will Campbell recounts the experience that confronted him with the radical implications of the gospel of reconciliation. His friend, civil rights worker Jonathan Daniels, had just been gunned down in cold blood by volunteer Deputy Sheriff Thomas Coleman. Will was livid with grief and rage over Jonathan’s murder.

P.D. tore into Will: “Was Jonathan a bastard?” Will commented on how Jonathan was one of the sweetest, most gentle guys he had ever known. P.D. pressed: “But was he a bastard?” His tone almost a scream. Will knew P.D. had him cornered. Will finally conceded, “Yes.” P.D. came firing back: “All right. Is Thomas Coleman a bastard.” That was easy. “Yes, Thomas Coleman is a bastard.”

P.D. said: “Okay, let me get this straight . . . Jonathan Daniels was a bastard. Thomas Colman is a
bastard. . . . Which of these two bastards do you think God loves the most? Does God love that little dead bastard Jonathan the most? Or does he love the living bastard Thomas the most?”

The truth of the gospel hit Will with such force that Will describes the encounter as something of a conversion experience. Will was overcome with emotion. He found himself weeping and laughing simultaneously. He told P.D.: “Damn, Brother, if you haven’t gone and made a Christian out of me.”

The gospel of reconciliation is a radical gospel; it is offensive to conservatives, moderates, and liberals alike. To think that God loves the Thomas Colemans of the world as much as the Jonathan Daniels’ is hard to take, isn’t it?

I have no doubt this is why so many liberals have equated the gospel with a social cause and so many conservatives have reduced the gospel to going to heaven when we die. Institutional Christianity on both the right and left has a tough time with this radical gospel of unconditional love and grace.

Paul says in his correspondence with the church in Corinth that God was in Christ reconciling the world to God’s self, not counting their transgressions against them (2 Cor. 5:19). All are loved and forgiven. Thomas Coleman and Jonathan Daniel; Hitler and Mother Teresa. All are God’s children.

How do we live this scandalous gospel? It’s not easy. I know I cannot do it on my own. It’s easy to identify with the victim, but to love the perpetrator of abuse or violence takes more love than I am capable of. I need grace. I need to “know” at the deep, core level of my being, beyond my intellect, the love of God that passes all understanding.

Only through fresh encounters with the Divine Love that pervades and sustains all reality—that we Christians believe became incarnate in Jesus of Nazareth—can we find the faith, strength, courage, and hope to love the Thomas Colemans of the world.
Posted by Chuck Queen at 1:42 PM 1 comment: 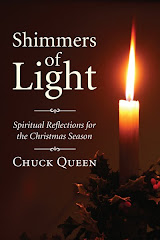 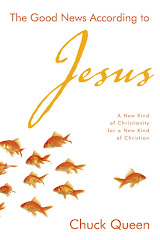