Dr. Albert Mohler versus musician Michael Gungor: Who is on the verge of theological peril? 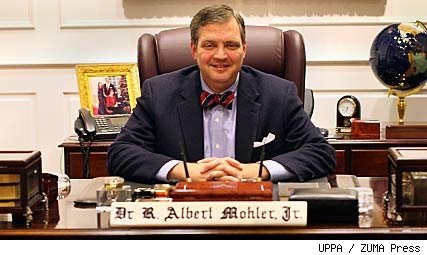 Dove Award-winning Christian musician Michael Gungor has been taking a hit from some of his evangelical fans for saying that he has no more ability to believe that Adam and Eve were literal persons who lived 6,000 years ago or that “a flood covered all the highest mountains of the world only 4,000 years ago” than he is able “to believe in Santa Clause or to not believe in gravity.”

In a recent podcast Dr. Albert Mohler, president of Southern Baptist’s flagship seminary in , claims that Gungor “is shifting into theological reverse, moving right back to the last decades of the 19th century.” According to Mohler, Gungor’s ideas are the result of Protestant liberalism, “which also came over to the [from ], infecting many denominations and seminaries.”

I mean, really, Dr. Mohler? When is learning how to think a disease? What Dr. Mohler doesn’t say is that practically all mainline biblical scholarship rejects his inerrantist view of the Bible and his literal interpretation of the creation story and flood narrative. Even many evangelical scholars who still cling in theory to biblical inerrancy (they are forced to sign faith statements in that regard) reject the literal reading of the early chapters of Genesis.

Actually, throughout most of the history of the church the literal meaning of a biblical text was deemed the least important reading by many Christian scholars and teachers. The literal reading was sometimes compared to the physical body, while the spiritual or metaphorical (sometimes allegorical) reading was likened to the human soul.

It’s a helpful analogy. If a person narrowly focuses on the physical body to the neglect of the soul (a healthy inner life), that person becomes quite shallow and lacks spiritual, emotional, and psychological substance. When the literal reading takes precedence over the spiritual/metaphorical/theological reading of the biblical text, the result is a superficial kind of Christianity that lacks depth, mystery, heart, and struggle.

Mohler claims that “when the Bible speaks, God speaks.” Is that true? Consider the following biblical passages,


“If a man is caught lying with the wife of another man, both of them shall die, the man who lay with the woman as well as the woman” (Deut. 22:22).


“As in all the churches of the saints, women should be silent in the churches. For they are not permitted to speak, but should be subordinate, as the law also says. If there is anything they desire to know, let them ask their husbands at home. For it is shameful for a woman to speak in church” (1 Cor. 14:33b-35)


“Let a woman learn in silence with full submission. I permit no woman to teach or to have authority over a man: she is to keep silent. For Adam was formed first, then Eve; and Adam was not deceived, but the woman was deceived and became a transgressor” (1 Tim. 2:11-14).

Are the above texts literally God’s word? Are these instances of God speaking? I hope not, don’t you?

The more people become aware of what is actually in the Bible, the less likely they are  to believe that the Bible floated down from heaven on the wings of angels and is a literal word from God.

Human beings wrote the Bible and because flawed and fragmented human beings wrote Scripture, the Bible is also flawed and fragmented. It is also a beautiful, powerful book that contains a variety of sacred literature of diverse genre. The Bible mirrors the human struggles and contradictions that characterize the very human lives of people of faith everywhere and anytime.

All Christians read the Bible through a particular lens that reflects their biases. Everyone brings their biases with them into the process of reading and interpreting biblical texts. A healthy bias is rooted in common sense, reason, the best of human intuition, honest struggle with contradiction, ambiguity, and paradox, and a humble quest for the truth. It is natural for one with healthy biases to be evolving in their faith.

An unhealthy bias is based on dogmatic assumptions and certitudes, and is often science- denying and reason-defying. This is why it’s nearly impossible to reason with such folks in the comment section of a blog like this one. Their biases denigrate reason, common sense, and science in favor of dogmatic beliefs.

“We will either believe the Bible is the inerrant and infallible word of God—that it is the specially revealed word of God, which is our ultimate intellectual authority, because it is, indeed, the word of God—or we’ll see it merely as a collection of inspirational and spiritual writings that are to be ‘reinterpreted.’”

We believe the Bible is inerrant and infallible, says Mohler, not because good judgment, critical discernment, spiritual enlightenment, reason, and common sense so indicates, but “because it is, indeed, the word of God.” It’s literally the word of God because Dr. Mohler (and those who adhere to his conservative version of Christianity) say it is. How is that for an honest, humble search for truth?

Because the Bible is both a divinely inspired and humanly imperfect book, the Bible contains wonderful, breakthrough, transformative texts and regressive, petty, punitive, and life-diminishing texts (as quoted above).  Thomas Merton contended that the Bible in the hands of an unenlightened person can become a deadly instrument.

In one of the great, transformative texts of Scripture (1 Cor. 13) the Apostle Paul concluded,

Isn’t it time we grow up?

Mohler contends that Gungor, by disbelieving that the early chapters of Genesis contain historical, factual information, is in danger of “theological peril.” But who really is on the verge of theological peril? I have had conversations with people who knew Dr. Mohler in his student days and they claim that back then he was a much more moderate, balanced, and reasonable thinker. What happened?

Father Richard Rohr contends that the Bible is primarily about the conversation between God and people of faith regarding power. Could he be right? Could the struggle with, against, and for power be behind much of what is written in and about the Bible? Is that the real struggle behind so much of our reading and interpreting of biblical texts today?