What does a progressive Christian statement of faith look like? 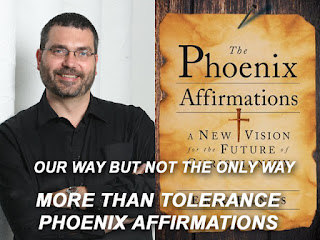 The Phoenix Affirmations is a set of twelve principles originally composed by a community of clergy and laypeople from Phoenix, Arizona. As word spread a number of Christian scholars and progressive Christian leaders from around the country added their input and helped to give shape to their current expression. These principles seek to convey the major values that ignite and fuel progressive Christian faith. Dr. Eric Elines, senior pastor of Scottsdale Congregational United Church of Christ authored the original version of the Affirmations and has written an excellent commentary on them titled, The Phoenix Affirmations: A New Vision for the Future of Christianity, published by Jossey-Bass (2006).

1. Walking fully in the Path of Jesus without denying the legitimacy of other paths that God may provide for humanity.
2. Listening for God’s Word, which comes through daily prayer and meditation, studying the ancient testimonies which we call Scripture, and attending to God’s present activity in the world.
3. Celebrating the God whose Spirit pervades and whose glory is reflected in all of God’s Creation, including the earth and its ecosystems, the sacred and secular, the Christian and non-Christian, the human and non-human.
4. Expressing our love in worship that is as sincere, vibrant, and artful as it is scriptural.

5. Engaging people authentically, as Jesus did, treating all as creations made in God’s very image, regardless of race, gender, sexual orientation, age, physical or mental ability, nationality, or economic class.
6. Standing, as Jesus does, with the outcast and oppressed, the denigrated and afflicted, seeking peace and justice with or without the support of others.
7. Preserving religious freedom and the church’s ability to speak prophetically to government by resisting the commingling of church and state.
8. Walking humbly with God, acknowledging our own shortcomings while honestly seeking to understand and call forth the best in others, including those who consider us their enemies.

CHRISTIAN LOVE OF SELF INCLUDES:

9. Basing our lives on the faith that in Christ all things are made new and that we, and all people, are loved beyond our wildest imaginations—for eternity.
10. Claiming the sacredness of both our minds and our hearts, and recognizing that faith and science, doubt and belief serve the pursuit of truth.
11. Caring for our bodies and insisting on taking time to enjoy the benefits of prayer, reflection, worship, and recreation in addition to work.
12. Acting on the faith that we are born with a meaning and purpose, a vocation and ministry that serve to strengthen and extend God’s realm of love.

Consider how different these principles are from the creeds and faith statements that circumscribe Christian faith into tight compartments of specific beliefs and doctrines. It is past time for the older creeds, originally written to unify an empire through uniformity of doctrine, to give way to new expressions of faith like the one above that promote unity through diversity, inclusivity, and the pursuit of the common good rooted and grounded in Christian love.

I pray and hope that this emerging way of being Christian will eventually win the day, though if it does happen will not occur anytime soon. Establishment Christianity still has too much power and control to allow these new emerging forms to have much of a say.

As I survey Christian history I find that creedal/doctrinal Christianity has done very little to make the world a better place. One could make a legitimate case that when all the evidence is considered creedal Christianity has done more harm than good. It is past time for a new reformation, which John Philip Newell calls the rebirthing of God.

I welcome such declarations as contained in the Phoenix Affirmations. Here indeed is the kind of Christian faith thinking, compassionate persons can embrace and find healing, liberating, and transforming.

(This was first published at Baptist News Global)